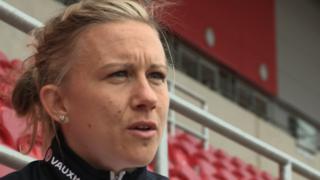 WSL 'more competitive than ever'

Birmingham City Ladies captain Laura Bassett says the Women's Super League "will be more competitive than ever" as it enters its third season.

Bassett led Birmingham to second place last year and she says they aim to compete with champions Arsenal this campaign.

Birmingham travel to Chelsea, who they beat in last season's FA Cup final, in their first game on Sunday.