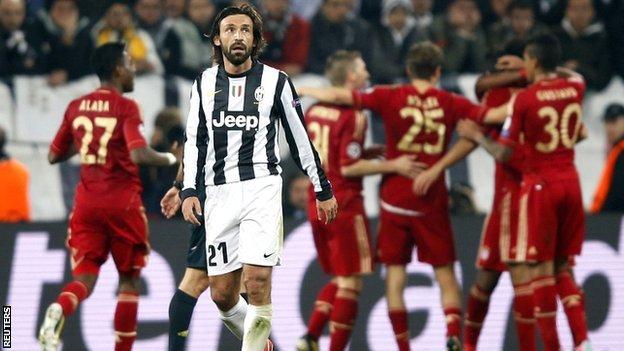 Juventus goalkeeper Gianluigi Buffon believes Bayern Munich are well equipped to win the Champions League after the German side cruised into the semis at the expense of the Italians.

Bayern won 2-0 in Turin to wrap up a 4-0 aggregate victory and will play either Borussia Dortmund, Barcelona or Real Madrid in the last four.

Buffon said: "We came up against a squad that showed technically, mentally and experience-wise they were better.

"They can win the Champions League."

Buffon, who was a beaten Champions League finalist in 2003 with Juventus, added: "I did not think they were so strong - they have everything in place to win it.

"I was even more impressed tonight than in Munich. Because in the first leg we did not give our all, but tonight we did, yet still there was nothing we could do.

"I thought we could have played at their same level tonight, but Bayern proved I was wrong."

Juve boss Antonio Conte admitted: "The best side went through. They showed that last week and here tonight.

"When you're playing against one of the strongest teams in Europe it becomes difficult for everyone. They were simply stronger than us and we can only congratulate them."

Although they have won the European Cup four times - most recently in 2001 - they were runners-up in 2010 and again last year when they were beaten by Chelsea on penalties in their own Allianz Arena.

But their coach Jupp Heynckes, 67, said his side would not be distracted by their domestic success as he strives to win his second Champions League title.

The German, who won the 1998 crown whilst in charge of Real Madrid when they beat Juventus, said: "In the last weeks there's been a lot of praise but the positive thing is the team has not been influenced by this. Too much praise is not good.

"We are champions and that was our aim but we also have other aims. We now have to see if we are on par with Real Madrid and Barcelona."