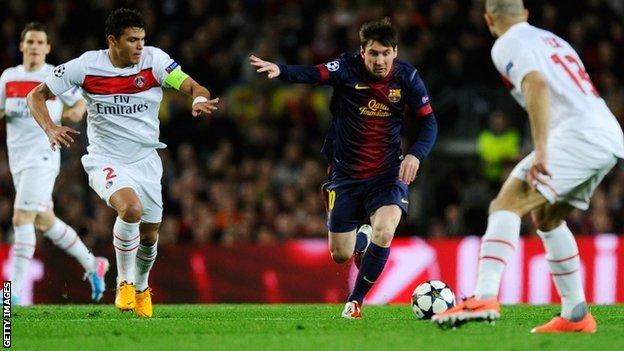 Substitute Lionel Messi was integral to according to both his team-mates and opponents.

Messi came on after 62 minutes and helped set up Pedro's goal as Barca drew 1-1 to advance on away goals.

"It doesn't matter if he's a little bit injured - he can change everything," said Barca's Gerard Pique of Messi, who strained a hamstring in the first leg.

The Italian added: "We caused them problems but Messi gave his team confidence."

Lionel Messi has scored 25 goals in 57 substitute appearances for Barcelona.

Cesc Fabregas had started in the attacking role usually occupied by the Argentine, but his team struggled to break down a PSG side which went ahead through Javier Pastore's 50th minute strike.

Messi's arrival off the bench 12 minutes later, at the expense of the former Arsenal midfielder, signalled the start of Barcelona's recovery and his precise pass to David Villa led to the strike that ultimately put his side through.

"Messi is the best player in the world and he changed the game just by being on the pitch," Villa told television channel Canal Plus.

"We have to congratulate him for his show of commitment to the team and to football. It is thanks to him, and everyone else, that we have qualified,"

Goalscorer Pedro said: "Messi is a very important player and he put in a great effort after coming on.

"He was the catalyst - we changed after he came on and we have to thank him for that."

Pique believes that despite Messi's progression through the ranks of club's famed La Masia academy, Barcelona are fortune to have the four-time world player of the year.

"We are very proud and lucky to have him in our side. He's our reference as a striker - he can score, he can pass, he can do anything and everything," the defender said.

Barcelona's success earned them a place in the last four of the Champions League for a record sixth consecutive season.

The Catalans join their arch enemies Real Madrid in the semi-final draw (Friday, 11:00 BST), along with German duo Borussia Dortmund and Bayern Munich.

First-leg ties will be played on 23 and 24 April with the return fixtures the following week.

London's Wembley Stadium will host the final on 25 May.