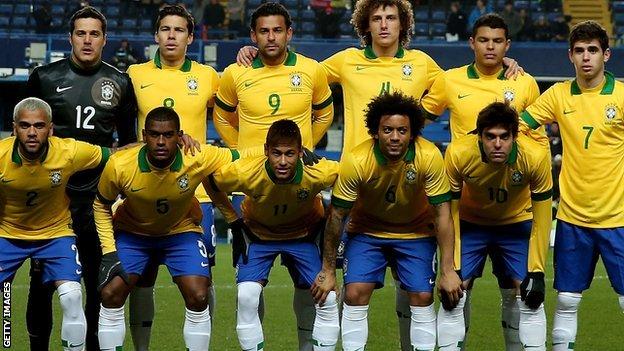 Five-time World Cup winners Brazil have fallen to 19th in the Fifa world rankings, their lowest ever position.

Brazil are hosting the 2014 World Cup but a lack of competitive matches has seen them drop to their worst placing since the rankings began in 1993.

England are seventh, the Republic of Ireland are 39th, Wales move up 22 places to 49th, while Scotland are 77th and Northern Ireland are 119th.

Spain remain top of the rankings, ahead of Germany, Argentina and Croatia.

England's 1-1 draw in Montenegro has seen them fall from fourth last month to seventh, with Portugal (fifth), Colombia (sixth), Italy (eighth), the Netherlands (ninth) and Ecuador (10th) making up the rest of the top 10.

Chris Coleman's Wales side have returned to the top 50 for the first time since September 2012, but Scotland, who are already unable to qualify for the 2014 World Cup after a 2-0 defeat in Serbia, have fallen to their lowest position since August 2005.

Northern Ireland have slumped to 119th, down from 98th last month, having lost 2-0 at home against Israel.

That result puts Michael O'Neill's team below Antigua and Barbuda, Surinam and Tajikistan in the rankings.