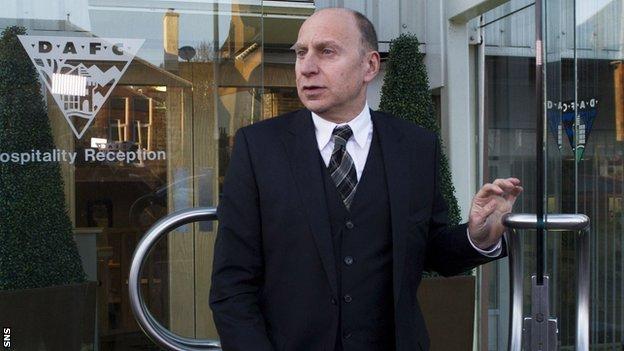 Dunfermline Athletic's interim administrators have been given the go-ahead to continue their bid to save the football club.

The First Division outfit had been granted interim administration last month after facing a winding-up order over a £132,000 tax bill in February.

Insolvency practitioners Bryan Jackson and Robert Barclay were given time to prove a rescue plan was in place.

And the duo from BDO have now been appointed as administrators.

HM Revenue and Customs did not oppose their petition when it was considered by Lord Malcolm at the Court of Session in Edinburgh.

Dunfermline's counsel, Susan Ower, outlined the steps taken by the interim managers during their time in post.

"They have identified potential cost savings and that unfortunately has included staff redundancies," Miss Ower told the court.

Seven first-team players and three from the youth ranks were made redundant immediately after the club went into administration, while assistant manager Gerry McCabe also left East End Park.

Miss Ower said the administrators had written to creditors and contacted key suppliers, giving advice over the continued trading of the business.

"They have met with potential purchasers of the business on a number of occasions," she said.

"They have obtained payment of £100,000 from potential purchasers and that is to assist with the costs of continued trading."

A community strategy group called Pars United has been formed to help save the club.

Most of Dunfermline's debt, thought to be about £8.5m, is owed to Mr Masterton and other directors.

The former Bank of Scotland executive had indicated he was prepared to transfer his shareholding for the purposes of a company voluntary arrangement (CVA).

Mr Jackson told BBC Scotland this week that such an agreement with creditors would be necessary before the start of next season if the club is to survive.

Going into administration has already led the Scottish Football League to dock the Pars 15 points, which means a side that was chasing promotion until financial problems came to a head are now involved in a relegation battle.

They are now only eight points ahead of bottom side Airdrie with five games remaining - and three behind Fife neighbours Cowdenbeath.

Should Dunfermline remain in second bottom spot, they will face a relegation play-off to prevent themselves dropping into Division Two - unless league reconstruction plans, which go to a vote next week, make that process null and void.