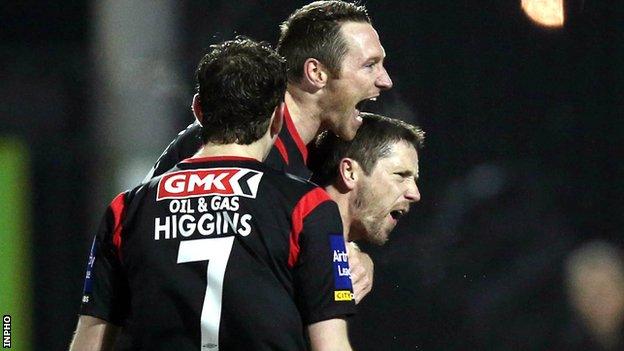 Dundalk dominated the early stages and Vinny Faherty fired the hosts ahead before Patterson levelled from the spot after a push on Ruaidhri Higgins.

Barry McNamee hit the top corner before Patterson slotted in another penalty, given for handball against John Sullivan, after 67 minutes.

City's Shane McEleney was red-carded for use of the elbow on 73 minutes.

Sligo have the chance to restore a five-point advantage when they host Cork City on Saturday.

Faherty's opener after 18 minutes, from a fine pass Keith Ward pass, was reward for Dundalk's bright opening to the game.

Dundalk were unhappy with referee Neil Doyle decision's to award a penalty for Mark Rossiter's challenge on Higgins, which Patterson converted on 31 minutes.

McNamee made it 2-1 in the 56th minute, the midfielder rifling in from 18 yards.

Derry held firm after McEleney's straight red, for a foul on Tiarnan Mulvenna, to continue their excellent start to the season.