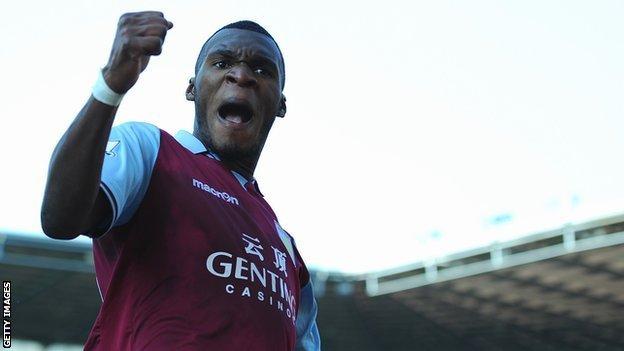 But Lambert has no plans to sell the 22-year-old Belgian forward he signed for £7m from Genk in August.

Lambert told BBC Sport: "He is hot property. If you wanted to prise Christian away from here you would want a sizeable cheque, that is for sure.

"He has the potential to be fantastic. If you look at modern day figures then £25m is probably a good start."

Lambert added: "We can't stop people looking at him but he is under contract here. He is enjoying his football at the moment and doing fantastically well."

Benteke has scored 15 goals for Aston Villa in 29 Premier League games this season (19 in all competitions) and his form has played a large part in keeping Darren Bent out of the team.

Benteke's impact means he has drawn admiring glances from Tottenham but Lambert is in no rush to give him an improved contract.

"He has only been here seven or eight months," the manager added. "I will wait until the end of the season and I will sit with people."

The winger, who plays for this father's team, was a January target for both Liverpool and Reading.