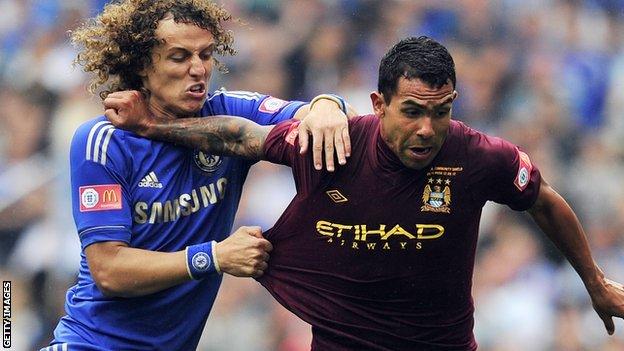 While the incentive is obvious for both Chelsea and Manchester City in Sunday's FA Cup semi-final, the likely winner is much less so.

The prize is a place in the final against Wigan or Millwall but which big spender wearing blue will be heading back down Wembley Way in search of silverware come May?

BBC Sport studies each side's systems and statistics, and speaks to pundits Pat Nevin and Mark Lawrenson about the stars who will decide the outcome.

There is only one word to describe Chelsea's grip on the FA Cup in recent years - incredible.

Before 1997, Chelsea had only won the trophy once in their 92-year history and been runners-up on three occasions. But in the last 17 seasons, they have reached the final seven times, with six victories.

Their record is particularly impressive since the new Wembley Stadium was completed in 2007. Chelsea won the first FA Cup final to be held there, and they have not lost in six subsequent visits in the competition, including three more finals.

You have to go back to 8 March 2008, and a shock quarter-final defeat by Barnsley, for their last loss in open play.

Match of the Day pundit Mark Lawrenson, who won three successive League Cup finals with Liverpool at the old Wembley from 1982 to 1984, says Chelsea's record at Wembley and in the FA Cup will be a factor, although not necessarily a positive one.

Lawrenson said. "At Liverpool, the glass half-empty players would be thinking, 'We are due to get beaten here because our record is so good'.

"If your glass was half-full you would be thinking, 'This is great - we always win here'."

Chelsea's history in the FA Cup and at Wembley bodes well but their recent head-to-head record against City is far less encouraging.

The London side have won only two of their last nine meetings with City in all competitions, losing six and drawing the other.

In their last five matches in the Premier League and Community Shield, City have enjoyed more possession on four occasions, including when they played more than 30 minutes with 10 men when Gael Clichy was sent off during Chelsea's win at Stamford Bridge in December 2011.

"Chelsea will not frighten City and that will make a big difference to City's mindset," Lawrenson said.

There have not been many reasons for Chelsea fans to smile this season, but Juan Mata has provided most of them.

Mata was Chelsea's player of the year last year and has continued to produce the same magnificent form this season.

He is the one attacking player that interim manager Rafael Benitez seems to have decided is undroppable. He has appeared in 53 of Chelsea's 57 games in all competitions, starting 46 of them and scoring 18 goals. They have won only one of the four matches he has missed.

His vision, touch and passing ability, allied to a willingness to demand possession no matter how tightly marked, has been vital for Chelsea in all competitions. Nobody has made more assists than him in the Premier League.

But it is in the FA Cup where he has really come into his own. In 380 minutes over five ties he has scored one goal and added five assists, including a sublime pass for Demba Ba to score the winner in the quarter-final replay win over Manchester United.

Nevin said: "Mata plays in the number 10 role so he is undoubtedly pivotal in the key central area on Sunday.

"He is a fabulous player and that role is crucial. You have more chance to influence the game from the central area and Mata does that brilliantly."

Ask City boss Roberto Mancini what his side's biggest failing has been this season and he will reply that it is in front of goal.

That has not been a problem for Carlos Tevez in the FA Cup, however. The 29-year-old Argentine has scored five goals in four ties this season, including a hat-trick against Barnsley.

Tevez also has a handy record against Chelsea. That started in his first season in English football, 2006-07, when he netted a consolation for West Ham in a 4-1 defeat at Upton Park.

In total, he has scored eight times in 10 games against the Blues, including two this season - in a 3-2 win in the Community Shield at Villa Park and a 2-0 win in the league at Etihad Stadium.

"City's good players are starting to play well," Lawrenson said. "It is a little late for them in the Premier League but they are going all out for the FA Cup.

"Tevez had another excellent game in the Manchester derby on Monday and, when he is in this sort of form, he is difficult to stop."

When Chelsea's midfield fires it looks unstoppable, but finding the right players and balance has been a struggle during a turbulent season.

It is not just a question of whether to field all three 'Amigos' - Mata, Eden Hazard and Oscar - but also who to use in the holding role.

Benitez, for all the criticism aimed at him, has not been afraid to make big calls.

The best example of this is his treatment of Frank Lampard, who has been sacrificed in the biggest games in recent weeks, and was notably replaced at half-time in the first quarter-final tie with United - then left out of the replay.

Getting the mix right will be crucial against City and Nevin explained: "I would play David Luiz as a deep-lying central midfielder on Sunday. I think that he is best in that position and where he can learn to be even better.

"If he plays there he is not a holding midfielder like John Mikel Obi. I like having a player with a better range of passing who can control the tempo. That is a role Lampard can play as well.

"The temptation for City may be to play Yaya Toure deeper to destroy that threat but then they will miss his power going forward.

"Chelsea are outsiders but they are not big outsiders and their quality in midfield is good enough to beat any side."

No team has reached the FA Cup final without conceding a goal since Harry Catterick's Everton side in 1966, but City are within a round of matching that.

True, City have played only one top-flight team - Stoke - on their way to the semi-finals, despatching three Championship sides in Watford, Leeds and Barnsley.

All this was achieved without their regular keeper in goal. But Costel Pantilimon's reward for his resilience could be to make way for England's Joe Hart this weekend.

But City's numbers are just as impressive in the Premier League, where they have conceded only 27 goals in 31 games and top the rankings in almost every defensive category.

Nevin said: "If I had to pick a winner, it would be City."

The general consensus seems to be that David Silva has not had the same sort of sparkling season for City that he did when they were crowned Premier League champions last May.

The Spaniard has still been mostly good, at times brilliant, but truly special performances have been few and far between.

Even so, he will be a massive miss in their midfield if he fails to shake off a hamstring injury before Sunday.

Silva has created almost twice as many chances [93] as any other City player in Premier League games this season, with Carlos Tevez next highest with 47.

"Silva would be very important, especially at Wembley where there is a little bit of extra space because of the bigger pitch," Lawrenson said. "He sees things others don't.

"Chelsea have got Oscar, Mata and Hazard who are brilliant at operating between the lines, as Silva is. If Silva is not there, it might mean that Barry, Milner and Yaya Toure are all in the midfield to plug those gaps."

If ever there was a man for the big occasion it was Didier Drogba. And so many times that occasion was at Wembley and in the FA Cup.

He scored the winner against Manchester United in the first final to be played at England's revamped home and netted in every subsequent FA Cup tie the Blues played at Wembley - the semi-final and final in 2009, 2010 and 2012.

The man Chelsea hoped would fill his boots, Fernando Torres, is still very much in the hit and miss mould but Demba Ba is likely to start up front against City, injury allowing, and is much more in the Drogba mould.

Even so, Lawrenson said: "Chelsea miss Drogba massively at times like this.

"It is so difficult to replace someone like that. Everything about him - his physicality, his technique and his goalscoring ability - made him a big-game player."