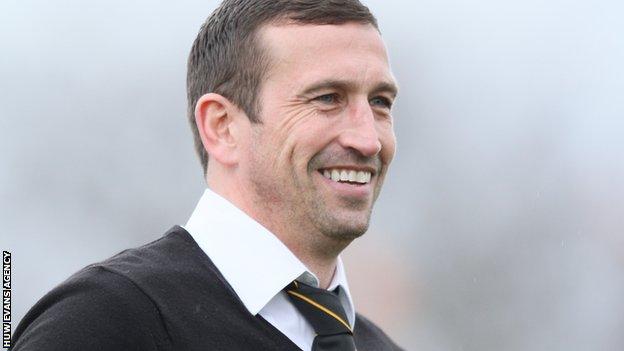 Justin Edinburgh has signed a new two-year contract as manager of Newport County.

Jimmy Dack has also committed to a further two years to remain as Edinburgh's assistant.

"Both Jimmy and I have been nothing but impressed by the club since we first arrived here," said Edinburgh, who was appointed in October 2011.

Edinburgh has transformed Newport from Conference strugglers to title contenders in his short time at the club.

Avoiding relegation was the sole objective when he succeeded Anthony Hudson in October 2011.

Newport finished the season just six points above the relegation zone, but County have been looking upwards rather than downwards ever since and secured their place in this season's play-offs by drawing with Cambridge on Tuesday.

Winning the title is mathematically possible, but Kidderminster and Mansfield are in the driving seat.

Edinburgh added: "The people are passionate about their football here and have the same desire as Jimmy and I to return to the Football League, the board and the chairman have backed those ambitions.

"It was an easy decision for us to make and we're delighted we can continue our plans for the future and achieve the same goals as everybody else at the club."