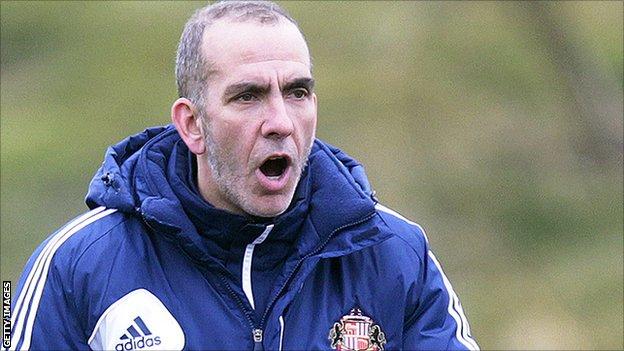 Sunderland head coach Paolo Di Canio has said his players owe it to the fans to end the 13-year wait for derby success at rivals Newcastle United.

The last victory on Tyneside came in November 2000 when goals from Niall Quinn and Don Hutchison earned a 2-1 win at St James' Park.

"It's the time to renew the moment," Di Canio told BBC Newcastle.

"It's the time to give satisfaction. We have to feel confident we have the quality and team to beat them."

Di Canio added: "The derby is the derby, it obviously counts for three points, not six, but it counts in terms of dignity, honour and pride, especially away from home.

"It will be fantastic to give them [the fans] satisfaction to celebrate, and if we do this we get the three points.

"The most important thing is to see the fans waving red and white scarves and celebrating in their homes, it will be a day to remember for many because the last time we won away was in 2000 with Hutchison and Quinn, that's too far [back in time]."

13 years of hurt on Tyneside

It is 13 years in 2013 since the Wearsiders last returned from Newcastle with three points.

Niall Quinn and Don Hutchison goals beat the Magpies in November 2000, while Thomas Sorensen saved a penalty from Alan Shearer in a season that saw Sunderland finish seventh in the Premier League.

It was a second win in a row against United, after the previous season's victory cost Ruud Gullit his job as Peter Reid's side won in monsoon conditions, but that brace of victories has been followed by disappointment.

The 5-1 defeat on Halloween 2010 was the most painful of the three losses suffered at St James' since that time, although they were minutes away from ending that run last season before Shola Ameobi's late equaliser snatched a point.

Results going into Sunday's game are stacked against Sunderland, both in terms of the derby and the Premier League this season in general.

Newcastle have won 51 of the encounters between the two clubs in the league, to the Wearsiders's 41, while Sunday's visitors are also on a run of nine games without a win.

However Di Canio insists his players will be up for the task against a Magpies outfit five points above them in the Premier League table.

"If we don't go there with the maximum desire, passion and intensity, then we ought to go to the psychiatric clinic," he added.

"This is the best stage in the world [for the players]. They will give their best and more than their best, for this I am confident."

Sunday's encounter is the Italian's second match in charge, after at Stamford Bridge.

Despite leading Swindon to promotion from League Two and the final of the Johnstone's Paint Trophy, the former Lazio and West Ham striker's record in local rivalries as a manager is disappointing.

In three matches against Oxford United, Di Canio's Swindon lost on every occasion, and conceded five goals, scoring once.