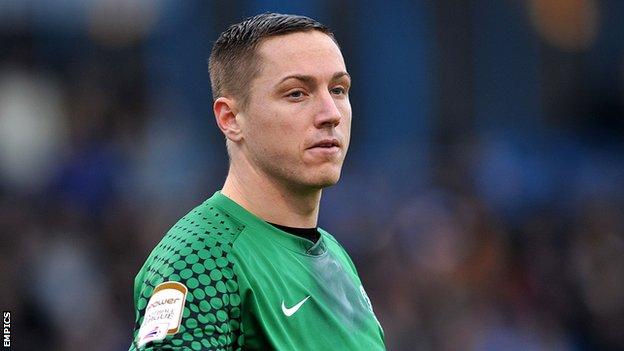 Goalkeeper Scott Davies has said he with Fleetwood after being satisfied that the club's ambitions matched his own.

"Fleetwood have shown the ambition that they want to go to the next level and that's all that matters to me.

"I see the project, I see the ambition and I want to be a part of that."

Davies, who grew up in the Lancashire town and helped the Cod Army win promotion into the Football League last season, continued: "As long as myself and Fleetwood had the same ambition, I didn't think there was ever going to be a problem."

Helped by the financial input of chairman Andy Pilley, Town won five promotions in the space of eight seasons to earn the right to play in the Football League for the first time in their history.

Davies, 26, has kept 16 clean sheets in 42 league appearances this term, with only Stuart Nelson of leaders Gillingham keeping more [18] in League Two.

to assist manager Graham Alexander in January, as well as cover for Davies - a move that the ex-Morecambe man feels he is continually benefitting from.

"I thoroughly enjoy working with Dave," added Davies. "He's a top coach and he's brought me on to another level, as have the rest of the management team. It's win-win at the moment and I'm obviously very happy."