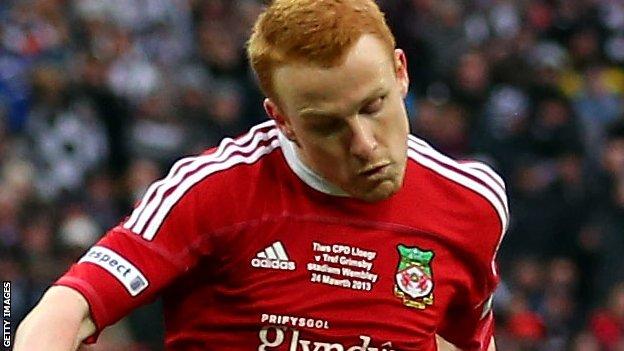 Wrexham midfielder Kevin Thornton could be out for the rest of the season because of a knee injury.

"He's tweaked his knee so we'll have him in morning, noon and night and try and get him fit for the play-offs," sais player-manager Andy Morrell.

"It depends on the severity of it and how quickly he heals."

Morrell's injury worries have mounted during recent weeks with Thornton the latest to be sidelined.

Wrexham are likely to be without defenders Chris Westwood and Martin Riley as well as midfielder Dean Keates for Saturday's home game against Kidderminster.

The trio missed the win over Cambridge but Morrell is hopeful his injury worries will ease before the play-offs, which will see Wrexham playing either on 23 or 24 April, depending on their final league position.

"We've got to make sure we look after the lads that are fit and make sure they're all right an and try and get the others back as back as quick as we can," Morrell added.

"They're not too bad the injuries and the lads have worked extremely hard to get themselves back fit because it's such a massive prize at the end of it.

"I would have thought they would be doing everything they can to get back fit. We've got to look towards the play-offs now and getting everybody fit."

Although Wrexham's own title aspirations are over, on Saturday they face a Kidderminster side who could still win the league.

Kidderminster are two points behind leaders Mansfield, who have a game in hand over their nearest rivals.

Despite securing a play-off spot, Morrell said Wrexham would not be easing up with three games of the regular season remaining.

"We still want to win the game and don't want to give anybody an easy ride," Morrell added.

"We've got to go in [the play-offs] with a bit of momentum so it's just an important game for us as it is for them."