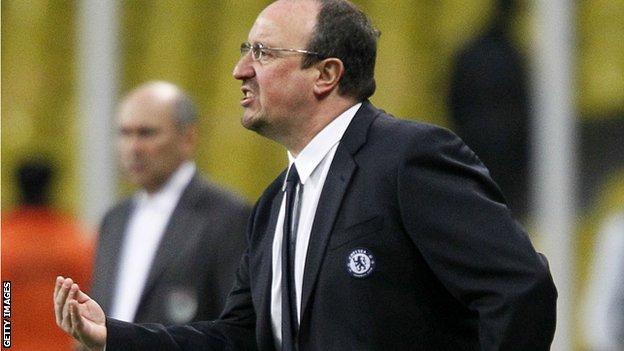 They conceded three second-half goals in Russia but still reached the semi-finals after a 5-4 aggregate win.

"We have to stop crosses and deal much better with them - things we couldn't do against Rubin," said Benitez.

Chelsea's FA Cup semi-final against Manchester City will be their sixth game in 16 days. It will also be their 59th match of the season.

Chelsea were looking comfortable at half-time of the second leg as Fernando Torres's early lob left the visitors leading 4-1 on aggregate.

But they looked fragile after the break as the Russians found success with a number of crosses from wide areas.

The Blues failed to cope with high balls into their penalty area and both Ivan Marcano and Gokdeniz Karadeniz headed in for the home side either side of Victor Moses scoring Chelsea's second.

"I was happy with the first half, but we have to improve on our second-half performance," added Benitez.

"I'm disappointed because we didn't defend well in the second half.

"It is not just the defenders who have to improve, because it is the whole team who defends. We have to carefully analyse our defending by watching the match video.

Chelsea are bidding to become only the fourth side to win all three of Uefa's major club competitions. The Blues, who won the European Cup Winners' Cup in 1971 and 1998, plus last season's Champions League, would emulate Juventus, Ajax and Bayern Munich.

"We managed the squad and hopefully we'll have some fresh legs for Sunday too."

The Spaniard said he was happy with Chelsea's progression to the last four, if not the result on an artificial surface in Moscow's Luzhniki Stadium.

"We have reached another semi-final, despite playing on a synthetic pitch and Ryan Bertrand being unable to play because of illness, so I'm pleased to score two goals and win," said Benitez. "We have gone through so I'm pleased with the team and their effort. The players gave everything on the pitch."

Benitez said he was not concerned about a heated exchange between Frank Lampard and David Luiz at the end of the first half.

"It's always good to have players arguing about things happening on the pitch, so you can correct these things at half-time," he said. "It's fine - it's not a problem."