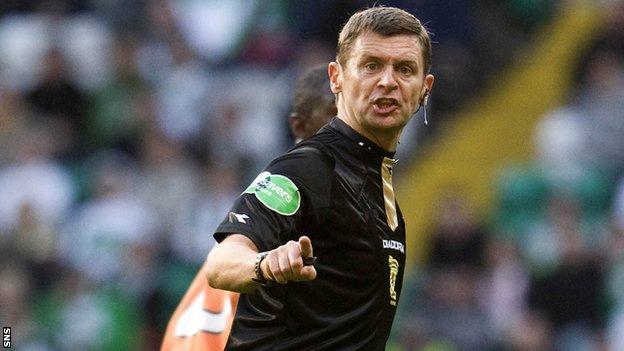 Cost is likely to prohibit the use of such systems in Scotland.

"Additional referees would be something I would be urging the SFA to have a look at," former grade one official Dougal told BBC Scotland.

"You're talking about £3m that would need to be found for goal-line technology, but there's another way of doing it and that's looking to use the resource that we have at the moment.

"I would like to see goal-line technology in Scottish football. I think most fans would like to see it, but there are big challenges all round - costs being one thing - but that apart I'm sure the match officials would also welcome any assistance they can get."

It would cost over £250,000 to install the technology in one stadium, meaning the combined cost to introduce goal-line systems across the entire Scottish Premier League would be in excess of £3m.

And Dougal, a director of a financial services company, believes extra officials over the course of a season would represent a fraction of the cost of goal-line technology.

"Using additional assistants behind the goals would help the development of younger referees and it would also mean we could utilise our top guys maybe doing two games over the weekend," said Dougal, who was a Fifa official for 12 years.

"We see three or four situations like this in a season and I can see why the SFA or the clubs wouldn't go down the road of spending £250,000 plus running costs.

"With the limited number of times that the ball has questionably crossed the line, I don't think it's worth the investment. However, I do think it's worth using the additional assistants behind the goal.

"I think that would be much better and would eradicate some of the mistakes but probably not them all."

A source close to the SPL told BBC Scotland: "Goal-line technology is not seen as a priority in this country. There are other more important issues at the moment but the main barrier is cost."