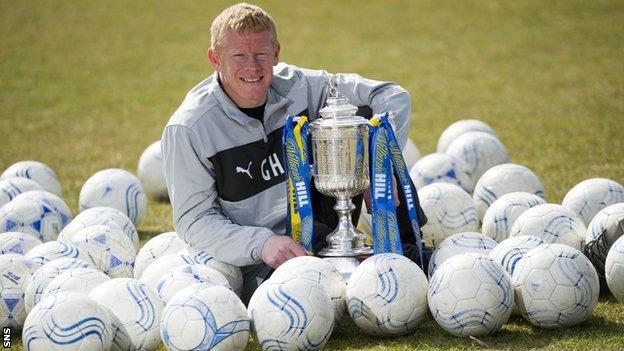 Falkirk boss Gary Holt feels "fortunate" to have the chance to seal a place in a cup final in his first match as a manager.

Holt takes charge of the Bairns against Hibernian in Saturday's Scottish Cup semi-final at Hampden.

Hibs counterpart Pat Fenlon feels his side owe their fans a cup final place after missing out on a top-six place in the Scottish Premier League.

"We have a massive incentive to get to a Scottish Cup final and maybe get into Europe," said Fenlon, whose team were beaten 5-1 by Hearts in last season's final.

"On the back of where we were last season that would be a good finish to the season."

Fenlon insists the meeting with First Division Falkirk will be no walkover and has urged his players to be at their best.

"We have had them watched in every game since the draw was made," Fenlon explained. "They have some very good young players and are very well organised at the back."

Falkirk last reached the final in 2009 when they lost to Rangers and Holt, a 1997 Scottish Cup winner with Kilmarnock, is hoping his players can shine at the national stadium

"To be on the back of four wins certainly breeds confidence," Holt said of Falkirk's recent form.

"I don't think motivation's a problem, it's calming them down that's the problem. That comes from their youthful exuberance.

"I'm just fortunate enough that I've got this chance. It's a cup semi and not a lot of managers get to do that in their career and I'm getting to do it first up."