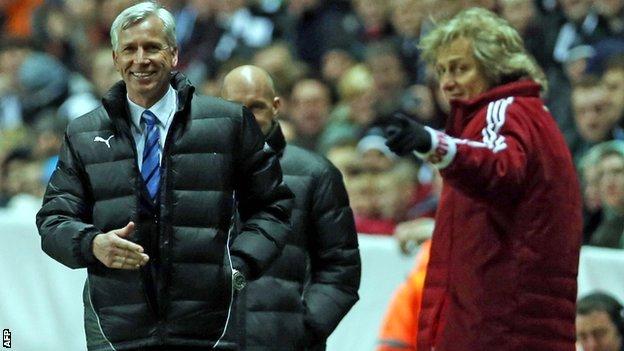 The Magpies drew 1-1 with Benfica on Thursday at St James' Park, but the Portuguese side's 3-1 win in the first leg proved to be the deciding factor.

Pardew now wants his side to improve on their 13th position in the league.

"I'm proud of this whole run but now we need to try to finish in the top 10 of the Premier League - that is the next target for us," said the Magpies boss.

While a top-half finish is their aim, Newcastle go into Sunday's derby against Sunderland only five points clear of the bottom three.

Pardew told BBC Sport: "The fans can see that we have good players here and a good strategy going forward for next season but we need to finish strongly, that is our priority.

"I can't wait for it [the Sunderland game], in the region it is the biggest game. Sometimes emotions can get a bit carried away but we need to keep them in check. Hopefully we can get a win."

Newcastle took the lead against Benfica when Papiss Cisse headed in Shola Ameobi's poked cross and the goal gave them hope of overturning the first-leg deficit.

Substitute Hatem Ben Arfa, who returned early from a hamstring injury, then fired over from inside the area before Eduardo Salvio struck on the counter-attack in stoppage time to confirm the end of the Magpies' European campaign.

Pardew said: "In the second half we went for it, you can't play at that pace for 90 minutes against a team of this quality or you will get picked off.

"The emotion is disappointment because we want to win, we almost had it and everybody in that dressing room knew that when Hatem cut inside, nine yards out on his left foot, that nine times out of 10 that goes in the net.

"I honestly thought that was it then, I thought we had won it."