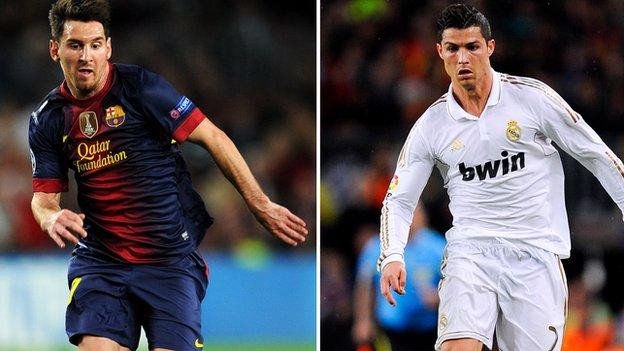 Barcelona and Real Madrid could meet in the Champions League final at Wembley after being kept apart in the semi-final draw.

In the Europa League, Chelsea will travel to Switzerland for the first leg of their last-four tie against Basel on 25 April.

The other match sees Turkish side Fenerbahce face Portuguese opponents Benfica. The return legs in the Europa League will take place on 2 May.

Chelsea are the only British side left in European competition after sealing their place despite a second-leg defeat against Rubin Kazan in Russia.

Rafael Benitez's side lost 3-2 but still progressed with a 5-4 aggregate win.

Tottenham lost on penalties against Basel after drawing 2-2 in each leg, while Newcastle drew 1-1 with Benfica and failed to overturn a 3-1 first-leg deficit.

In the Champions League, all-German and all-Spanish semi-finals were ruled out in the draw in Nyon, Switzerland.

Real - who eliminated Manchester United in the second round - booked their place in the last four with a 5-3 aggregate win over Galatasaray, although they lost 3-2 in Istanbul.

They were joined by Spanish league leaders Barcelona, who eliminated Paris St-Germain on away goals.

It secured a place in the last four alongside Dortmund, who needed two stoppage-time goals to beat Malaga 3-2.

Dortmund faced Real in the group stage of this year's competition, with Jurgen Klopp's team beating Real 2-1 at home, while in Spain the two sides drew 2-2.

"I don't think Madrid will be afraid because of what happened in the group stage," Dortmund general manager Hans-Joachim Watzke said. "They will respect us, just like we respect them."

Real ambassador Emilio Butragueno also believed their previous meetings would not be an influence.

"We have a lot of respect for Borussia Dortmund," the former Spain striker said. "We played them twice [in the group stage] but didn't manage to beat them.

"This time we hope it will different as we want to be in the final."

In regards to the other half of the draw, Bayern chairman Karl-Heinz Rummenigge says his club will play "the best team in Europe".

"Barcelona are the benchmark for me in Europe. They are the best team in Europe at the moment, with fantastic attacking potential."