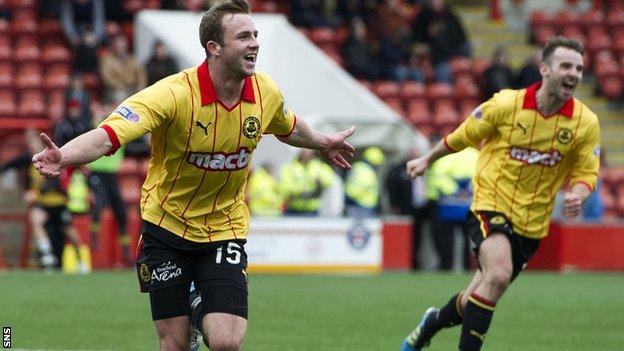 Christie Elliot scored a last-gasp winner for Partick as they came from behind to beat basement club Airdrie and move within touching distance of promotion.

The league leaders threw the kitchen sink at Airdrie in the opening stages of the game but were unable to convert any of their chances and it was the hosts who found themselves ahead in the 35th minute.

Liam Watt took advantage of some poor Partick defending and blasted the ball into the roof of the net from the middle of the area to score his first goal for the club.

The Diamonds defended resolutely in the second period but were finally undone in the 89th minute of the match.

Conrad Balatoni latched onto Aaron Sinclair's cross to head home from close range for the equaliser.

And substitute Elliot snatched all three points for his side in added time when he found the bottom corner from the middle of the box.

Airdrie will definitely finish bottom as they are 11 points adrift of Dunfermline in ninth with only three games to play.