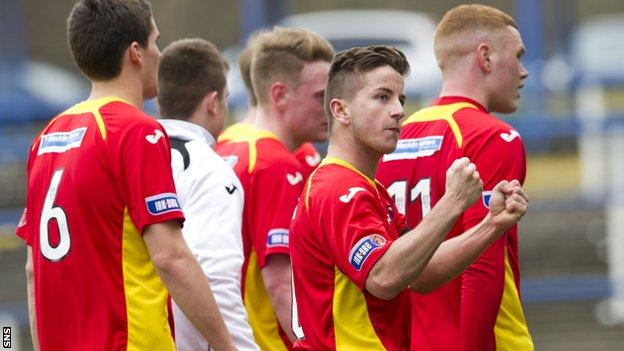 Leaders Partick Thistle only need two more points from their remaining four games to ensure promotion and the silverware after their win over Airdrie United.

But, despite ending their run of nine league games without a win, Dunfermline remain three points adrift of Cowdenbeath after their neighbours won the Fife derby against Raith Rovers.

It was the Pars' first game since a 15-point deduction for entering administration.

And they took a surprise lead 10 minutes in when Allan Smith found Thomson, who fired a low shot into the bottom corner for his second goal in as many games.

Morton pressed for an equaliser in the second half as substitute Aidan Fulton volleyed Kyle Wilkie's corner over from 18 yards.

Wilkie also had an effort saved by Michal Hrivnak.

Richie Burke's side came agonisingly close to snatching a late point when substitute Archibald Campbell hit the post from the edge of the box.

However, Dunfermline held on to to leave Morton needing to win all three of their remaining games and hoping that Thistle lose their last four if the Greenock side are to win the title.