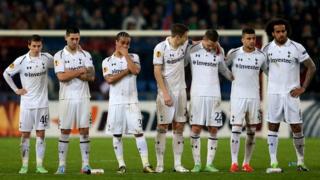 Tottenham manager Andre Villas-Boas says his team have been "heroes" in the Europa League, despite exiting the competition at the quarter-final stage.

Ten-man Spurs were knocked out by Swiss side Basel on penalties after battling through extra time after Jan Vertonghen was dismissed. The game was 2-2 at the end of 90 minutes, replicating the first leg score and making it 4-4 on aggregate.

Villas-Boas says Spurs have been a "great example for English football" in how to approach the Europa League and that they have changed the mentality that teams have towards the competition.

Championship: Swansea ahead at Barnsley after Norwich extend lead at top earlier today