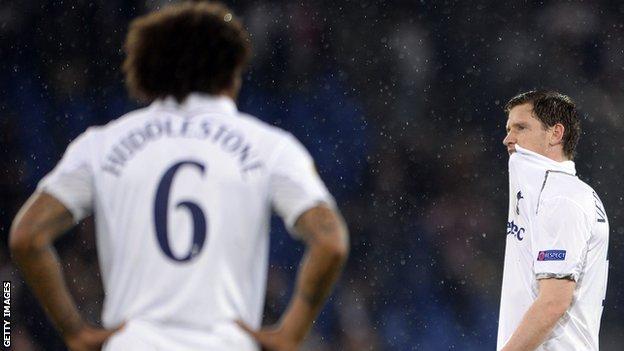 Tottenham Hotspur boss Andre Villas-Boas says his players have "set a great example to the country" by taking the Europa League seriously.

Spurs suffered an agonising 4-1 penalty shootout defeat by Swiss league leaders Basel after the quarter-final tie had ended 4-4 on aggregate.

But Villas-Boas is proud of the commitment his players showed during their run to the last eight.

"We made the country feel differently towards the competition," he said.

Having been held to a 2-2 draw by Basel in the first leg at White Hart Lane, Tottenham were missing a number of injured players for trip to Switzerland, including Gareth Bale (ankle), Aaron Lennon (knee) and William Gallas (calf).

Clint Dempsey scored twice at St Jakob Park but the visitors finished with 10 men after defender Jan Vertonghen was sent off for a professional foul towards the end of normal time.

After doggedly surviving extra-time, Tottenham were defeated by Basel in a penalty shootout with Tom Huddlestone and Emmanuel Adebayor missing from 12 yards.

Tottenham were extremely brave. They didn't play particularly well, being a little naive after they scored the first goal but they kept coming back. They gave a superhuman effort in extra-time. After going down to 10 men, they worked very hard behind the ball

Despite defeat ending his side's hopes of silverware this season, Villas-Boas was full of praise for the way his players have approached the Europa League, which has not been high on the list of priorities for some Premier League teams in the past.

"We are extremely happy for setting a great example for English football and how to approach this competition," the Portuguese added.

"To change the mentality towards this competition from one season to the other is very difficult.

Of the manner of their defeat, Villas-Boas said: "Penalties are always very, very difficult.

"We had assigned the strongest penalty-takers and we practised the penalties.

"The nature of penalties is very, very difficult and you can never recreate the same stress and emotion in training.

"They had their preferred slots where to put the ball, but it changes dramatically in live situations."

Spurs now face a battle to finish in the Premier League's top four and qualify for next season's Champions League.

They are currently fourth in the table but could drop to sixth by the time they next play, at home to Manchester City, on 21 April.

Tottenham should have faced Chelsea in the league this weekend but that game has been postponed as their London rivals face Manchester City in the FA Cup semi-final.