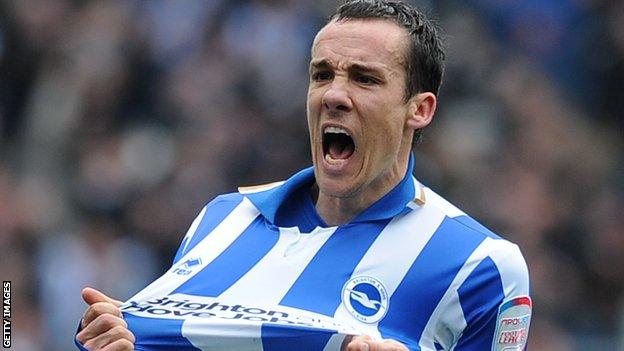 Brighton have yet to begin contract talks with David Lopez, although the Spaniard is keen to stay at the club.

The 30-year-old midfielder signed a one-year deal in August after being released by Athletic Bilbao.

"I've not heard anything yet so I'm just focussing on the remaining games," he told BBC Sussex.

"I don't know how the club are managing these things but it does not make a difference to me what division Brighton are in. I'm very happy here."

Lopez moved to the Amex Stadium after a decade plying his trade in La Liga with Osasuna and Bilbao.

So far, he has scored seven goals in 22 league starts and since been praised for his versatility by Brighton boss Gus Poyet.

Since being appointed in 2009, the Uruguayan has consistently recruited Spanish-speaking players, most recently Argentine striker Leonardo Ulloa, who joined the Seagulls in January.

"When I joined I knew I would have no problem being in the squad because there would be five Spaniards here speaking my language," Lopez continued.

"It has been the same for Leo and he deserves to win [after being nominated for March's Championship player of the month award] because he's already scored seven times - he's a goal machine."

On Saturday, they travel to Middlesbrough before taking on four of the division's bottom eight sides.

"All the big games are coming now and we are all fighting for the play-off places," Lopez added.

"Quality is important but mentality really matters now and it is probably the strongest teams mentally that will get in the top six."