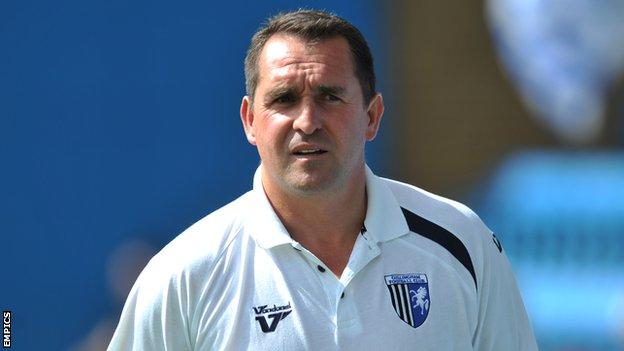 Gillingham boss Martin Allen takes his side to Cheltenham on Saturday with the chance to seal the League Two title.

Victory would crown the Gills champions at a ground where Allen supported from the terraces in the 1970s and managed for 15 months from September 2008.

"There's definitely something extra on it," he told BBC Radio Kent.

"Lets not hide from that. I didn't do a good job there and it probably saddened me more than anyone. I just want to do the job and then get home."

The 47-year-old used to watch games at Whaddon Road when his late father Dennis was Robins manager from 1974 and 1979.

Allen struggled during his own spell as boss 30 years later, leaving his post with the side 21st in League Two.

"After spending so much time there as a little boy following my dad's team it was bitterly disappointing to not achieve what I'd hoped to," he continued.

"I changed too much, too quickly and my personality didn't fit in and work there at the time. I've apologised and there's nothing I can do about it now.

"That all has to go out of the window on Saturday and I've got to do my job for the players and supporters of Gillingham.

"I have massive respect for the Cheltenham fans - you won't see me walking on the pitch or anything like that."

It ha been a different story for Allen since taking over at Gillingham and his side secured promotion to League One with a win over Torquay last Saturday.

However, Cheltenham are currently fifth in the table, just two points behind the final automatic promotion place, and Allen is expecting them to provide a stern test.

"The lads had a couple of days off and were back training on Tuesday to achieve what's always been the goal - winning the league," he added.

"Cheltenham are very strong, Mark Yates has done a terrific job. They've only lost two at home and we've only lost one away so it will be a very tough, but a very good, game."