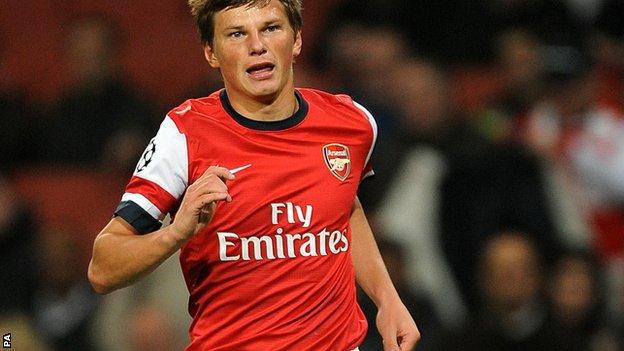 Arshavin, who signed from Zenit St Petersburg for a reported £15m in January 2009, will be out of contract at the end of the season.

The Russia international has made nine substitute appearances in this season's Premier League and Champions League, with two starts in the League Cup.

"I don't think he will stay here, because he doesn't play enough," said Wenger of the 31-year-old midfielder.

"But he has shown 100% commitment at absolutely every session, he has been an example for everybody.

"He has been questioned many times about his commitment, but if you saw him every day you would respect him for what he does on a daily basis. He has been absolutely fantastic."

Arshavin appeared to have settled quickly in north London, scoring all of the Gunners' goals in a 4-4 draw away at Liverpool the following April.

He netted 22 times over the next two campaigns, but only twice in 2011-12 before being loaned back to Zenit in February 2012.

His only strike this season came in Arsenal's 6-1 win over Coventry City in the League Cup last September.