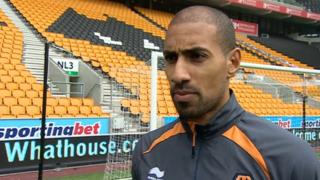 Team spirit can keep us up - Henry

Wolves captain Karl Henry leads his team into Saturday's vital Championship game against relegation rivals Huddersfield confident that renewed team spirit at Molineux can keep the club out of League One.

"This club can't get relegated, it's as simple as that," said Henry, who looks set to return to the starting line-up with David Davies out injured for the final five games.

Highlights of the clash will be featured on Sunday's Late Kick Off Midlands at 23:25 BST on BBC1.