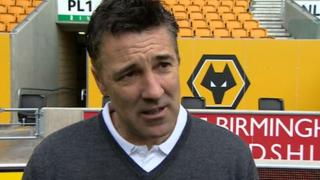 Wolves boss Dean Saunders tells BBC Late Kick Off Midlands that his players "must stand up" ahead of their crucial match against fellow strugglers Huddersfield Town.

Saturday's defeat at play-off-chasing Bolton Wanderers halted Wolves' run of three successive victories, but Saunders is backing his players to rediscover their winning form when they entertain the Terriers at Molineux on Saturday.

"The confidence is coming back and we have got lots of players playing well," the Welshman says.

Wolves' game with Huddersfield will be featured on BBC Late Kick Off Midlands on Sunday at 23:25 BST on BBC One, with the episode available on the BBC iPlayer from Monday.