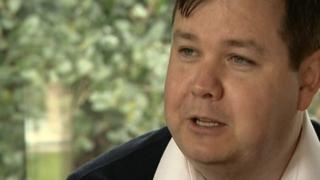 Wildes bought Vale out of administration for £1.25m in November, and two more wins would guarantee Micky Adams' side a return to League One.

The work of the new chairman to revitalise The Valiants, which includes him regularly interacting with fans on Twitter, will be featured on BBC Late Kick Off Midlands on Sunday at 23:25 BST on BBC One, with the episode available on the BBC iPlayer from Monday.