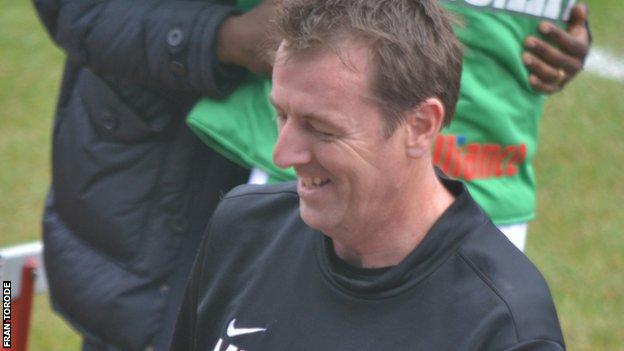 Matt Le Tissier is still waiting to make his Guernsey FC debut after failing to make the squad for the island side's matches at the weekend.

The former England international warmed up with the squad ahead of Sunday's 4-3 win over Raynes Park Vale, but was not included in the squad.

But Saturday's game with Farnham Town was called off after heavy rain.

Craig Young gave Guernsey a fist minute lead in their win over Horley, before grabbing the second 13 minutes later.

Dominic Heaume made the game safe after 24 minutes before he got his second on the stroke of half time.

Alex le Prevost was sent off for Guernsey 10 minutes after the break before Horley pulled one back with 22 minutes to go.

Guernsey made another fast start to Sunday's game as Le Prevost gave the Green Lions the lead after five minutes.

But they were made to work much harder as Dave Mosley equalised 10 minutes later and went ahead after Kelvin Herron found the back of the net on 27 minutes.

Dave Rihoy began the fight back as he equalised a minute into the second half, before Nigel Hutton made it 3-2 five minutes later.

Rob Wilkinson got the visitors back into it with 25 minutes to go before Raynes Park conceded an own goal three minutes from the end.

The results move Guernsey up to third in the Combined Counties League Premier Division.

The Green Lions lie three points off second-placed Epsom and Ewell but 17 points behind leaders Egham Town, although they do have seven games in hand.