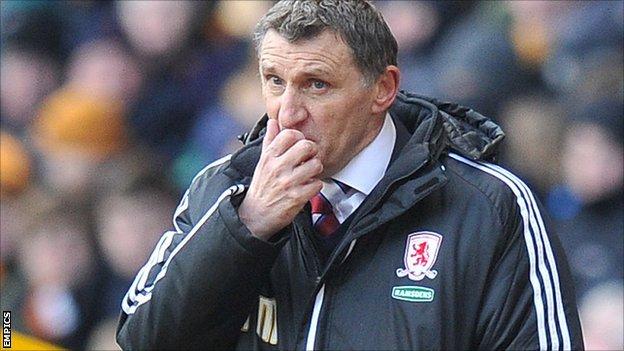 The next two games against fellow hopefuls Brighton and Nottingham Forest offer chances to close the gap.

"The fact is, it's important that with the teams we play, we can affect the teams above us," Mowbray told BBC Tees.

"Our job, in my mind, is to try to win those games and make things exciting at the end of the season."

Gus Poyet's Albion arrive at the Riverside on Saturday, while Billy Davies' Forest are the visitors three days later.

"We're playing two teams at home here with huge expectations of reaching the play-offs and I genuinely feel we can nick points off both of them," Mowbray insisted.

"Especially Forest, they go to Cardiff at the weekend, and if they lose there and lose to us, we'll be there with them, so let's not give up hope yet.

At this stage, Mowbray is likely to keep faith with the squad that has kept them in the promotion picture for much of the campaign, rather than look to give some of their talented youngsters first-team opportunities.

"I fully understand the philosophy of looking at next season and looking at young players, if that is what we have to do," he continued.

"If the trend is going to continue, it will be homegrown players and players coming through the system that we don't have to pay transfer fees for.

"I'm not sure with five games to go is the right time, let's see what the next two games bring and we'll make an assessment on where we are and what we feel we need to do."

Boro's hopes have stalled at the tail-end of the season in the last two years, notably 12 months ago when they were top at the end of 2011, but finished five points out of the play-offs in seventh.

The Teessiders were third at the end of 2012, but have suffered a similar slump, adding just eight points in the last three-and-a-half months.

Their slide has increased the pressure on Mowbray and his players and increased frustrations among Boro supporters, creating an atmosphere which he is hesitant to introduce to inexperienced players.

"It's gone on for weeks now, but I think in another week we can reassess where we are."