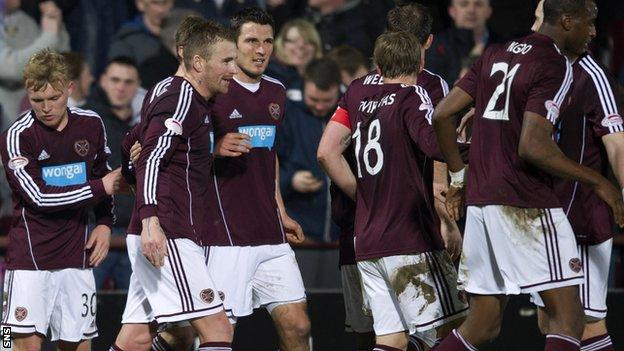 Hearts will vote in favour of proposals to change Scotland's league structure in time for next season.

SPL clubs are due to vote on the 12-12-18 proposal at Hampden on Monday, with an 11-1 majority needed to carry the plan.

"While by no means perfect, (the proposal) delivers a series of important improvements," Hearts said.

Explaining the club's stance, Hearts said the proposal for 12-12-18 would increase competition for the top 24 clubs, "with almost every game at every stage in the season having value for spectators, broadcasters and sponsors".

"Hearts believes, as one of the most established and largest clubs in Scottish football, that it has a responsibility to the game in this country and that the new proposed 12-12-18 structure, while by no means perfect, delivers a series of important improvements," the statement continued.

"These are improvements we, along with many other clubs and their supporters, have lobbied for in recent years.

"It is incumbent on us to deliver change for the game as a whole and in turn improve the longer term prospects of all clubs, at all levels, within the game."

Meanwhile, Aberdeen chairman Stuart Milne feels Scottish football "is on its knees financially" and that 12-12-18 is a viable alternative.

"The fact that it is an all-through distribution system is going to bring benefits right down through all the clubs," he added.

Motherwell, both Dundee clubs and Inverness CT have all publically stated they are in favour of the proposal.