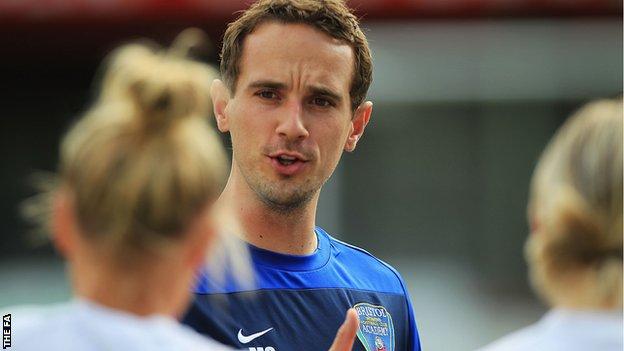 Bristol Academy boss Mark Sampson believes changes made behind the scenes will help them be more competitive in the women's game.

The Super League club have agreed a five-figure sponsorship deal with Championship outfit Bristol City for this year's campaign.

And the Vixens have decided to move away from their traditional blue strip and adopt City's red for the season.

"We want to be competing with Arsenal, Chelsea and Liverpool. When you say those names with Bristol Academy alongside it, a lot of people will say we're doing well to compete.

"We want to be able to do that and maybe overtake them."

Bristol Academy previously had an affiliation with City's rivals Bristol Rovers, but have been a standalone club since 2006.

Academy are based at the SGS College at Filton, which is also home to Bristol City's youth academy set-up.

Sampson's side finished fourth in the Super League last season, as well as reaching the semi-finals of the FA Cup and League Cup.

"We've done well over the past two years being our own team but it's really going to help having the support of Bristol City.

"With other teams strengthening over the summer, it's important we show the same commitment to improve.

"If we can get a good start and some momentum then we'll be within reach [of silverware]."

They have already progressed to the FA Cup quarter-finals this season and meet Everton on Sunday, before facing the Blues again in the league the following Thursday.

And Sampson thinks their chances of silverware this season will improve with their new deal in place.

"It's about modernising and moving forward," he continued. "It speaks volumes for us that we can be so open-minded that we can make a change to help us.

"I think it's going to be a positive step forward. We're in a position where we want to expand and get better because we can't do it on our own.

"Other teams in the league have really kicked on and we need to make sure we hang on in there."

The club have also moved to make changes on the field with a number of new signings, including England Under-23 midfielder Lucy Staniforth and former Spain striker Natalia.

"It was a nearly a good season for us last year, as we got to two semi-finals and finished fourth," added Sampson.

"I felt towards the end of the year we suffered from a lack of quality in depth. We played a lot of games in a short space of time and it came back to bite us in the backside.

"If we can get to that stage this season then I think we'll be in a better position because we've got a bigger squad and some young players who have improved and are now ready."

Natalia, 27, scored over 300 goals in 12 seasons for Rayo Vallecano while Staniforth arrives from Lincoln Ladies as a replacement for Jess Fishlock, who joined Seattle Reign in America.