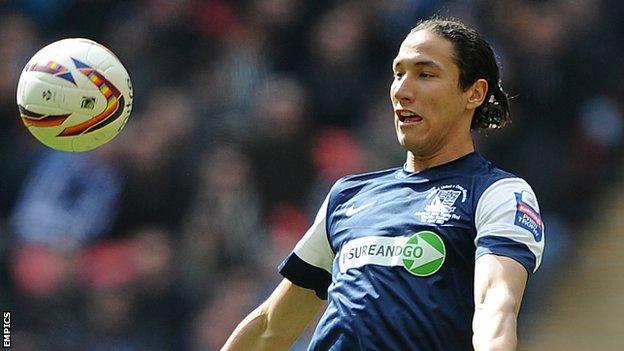 Mohsni's three-year Shrimpers stay has been blighted by disciplinary problems and the 25-year-old has come close to leaving the club on numerous occasions.

The Tunisian will not feature against Bristol Rovers on Saturday.

"Bilel won't be in the squad. I've got a couple of meetings with Bilel. One at 2pm today [Friday] and we'll see where that takes us," Brown told BBC Essex.

"The meetings are about the future of himself, myself and Southend United."

Mohsni started last weekend's 2-0 Johnstone's Paint Trophy final defeat by Crewe, in which he gave the ball away for the Alex's second goal.

He was then left out of the squad that lost 4-2 at Rochdale on Wednesday.

Mohsni has been employed in numerous positions on the field and has become renowned for pitching in with important goals, having scored 18 in 62 league games for United.

And he was warned on multiple occasions by previous boss Paul Sturrock about his poor disciplinary record, having collected 17 bookings and four red cards in three seasons.

Mohsni was signed by then Ipswich boss Paul Jewell on loan in September with a view to a permanent move.

But he made just five substitute appearances before returning to Essex.