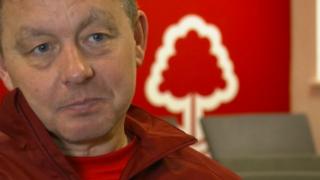 Nottingham Forest manager Billy Davies tells BBC Late Kick Off Midlands of his pride at winning the Championship Manager of the Month award for the seventh time.

Davies takes his team to table-topping Cardiff tomorrow on the back of a 10-game unbeaten run, and says he was "absolutely delighted" to win the accolade for March - after four wins and a draw.

BBC Late Kick Off Midlands will be featuring Forest on Sunday's programme at 23:25 BST on BBC One, with the show available on the BBC iPlayer from Monday.