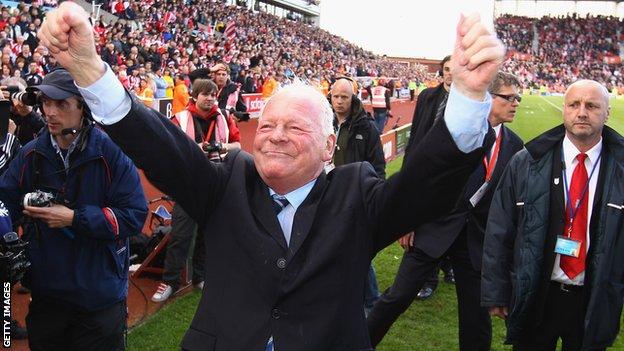 Wigan chairman Dave Whelan says he will be "so proud" to lead the team out at Wembley ahead of Saturday's FA Cup semi-final against Millwall.

Whelan, 76, last appeared on the Wembley pitch in the 1960 FA Cup final, when he broke his leg while playing for Blackburn Rovers in a 3-0 defeat to Wolverhampton Wanderers.

A full-back as a player, Dave Whelan was part of the Blackburn Rovers team who contested the 1960 FA Cup final against Wolverhampton Wanderers at Wembley.

He lasted just 42 minutes of the game, however, after breaking his leg in a challenge with Wolves winger Norman Deeley.

"Wolves then were a very, very good side. So were our Blackburn side," says Whelan.

"Johnny Carey had been our manager, Dally Duncan was for the cup final, it had all the makings of a great match. But then I was carried off on a stretcher - horrendous."

"He wants me to take the team out. I will be so proud."

Consequently, the Wigan owner will lead his team on to the field at Wembley with unfinished business on his mind and Millwall firmly in his sights.

"When I stand in the dressing room before the match or in the tunnel, I'm bound to think of that day in 1960," he added.

"I don't want to think about it because it was an awful experience to do that, to get carried off, to go to hospital and to lose. But it's bound to go through my mind.

"Saturday is a big game for us, a tough game, but we can win it. I know we can."

If Wigan are to reach a first FA Cup final, their 39-year-old manager Martinez will play a crucial role.

The Latics signed the Spaniard on a free transfer in July 1995 and the midfielder played more than 200 matches for the club before leaving for Motherwell in 2001.

However, Martinez returned to the North West in 2009 when he took over as manager at the DW Stadium after leaving Swansea City.

"Roberto is a one-off manager," said Whelan. "He's so cool under pressure and nothing gets him down, he's always upbeat. He starts work at eight every single morning and works until eight o'clock at night.

"He's just a remarkable man, a remarkable manager. He scored for Wigan Athletic when we were playing Runcorn away, probably 22 years ago. He knows the history of the FA Cup and he's up for getting to the final and winning the final."

In the past, Whelan has spoken about retirement and even handing the club over to his grandson but, for now at least, those plans are on hold.

"If we get to the final I think that might make me stay on, but it's a long way to go and we've got a hell of a fight on against Millwall. All the lads know it, all our supporters know it," he said.

"But we've got to go and win it. If we can win that and get to the final and pick up the fantastic FA Cup I could be here for 10 or 20 years."