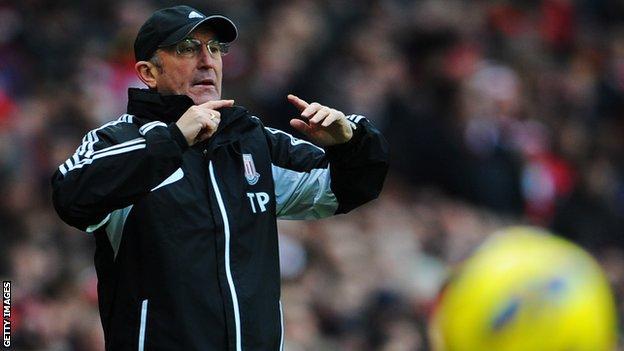 Stoke City manager Tony Pulis believes the club's supporters have no reason to "moan and groan".

The Potters have won just once in their last 13 Premier League games and sit three points above the relegation zone.

But Pulis has called on Stoke's fans to get behind the team in their three remaining home games.

Stoke face league leaders Manchester United at the Britannia Stadium on Sunday in the first of their six remaining games this season.

They were booed by home fans at half-time in their 3-1 defeat by Aston Villa, a loss which heightened their relegation fears.

Supporters have grown frustrated this season as Stoke, who have never finished below 14th since promotion to the top flight in 2008, failed to progress up the table despite significant summer purchases.

Brek Shea and Jack Butland were also signed in January, although the latter was loaned back to Birmingham. Stoke's net spend over the last five years is reportedly close to £80m.

"But I don't think there is any reason for people to be moaning and groaning.

"People can talk about the previous seven years at this club and say it has been one of the most successful periods it has had, but that counts for nothing.

"But the crowd have been good. There haven't been many occasions at the Britannia over the last six or seven years when they haven't got behind the lads.

"I think they realise we have got three massive games at home and I am expecting the crowd to be absolutely fantastic in those three games."

Pulis, who is in his second reign at the Britannia Stadium, has had to face the criticism himself but it is not something he allows to bother him.

"It is tough times and you have to accept when you don't win football matches you are going to be under pressure and the spotlight is going to be on you," he added.

"But I try to keep my feet on the ground. You keep working at it and embrace the challenges ahead."