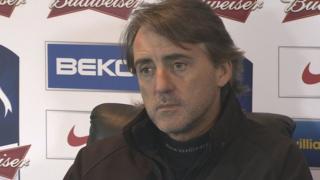 Manchester City manager Roberto Mancini believes that a one-week break during December would benefit the England team because it is important for players to recover properly.

Looking forward to their FA Cup semi-final against Chelsea on Sunday, Mancini expects a tough game and insists winning the trophy is very important for City.

Mancini says striker Sergio Aguero is still not 100% fit, but had no reaction to his knee injury after coming on as a substitute and scoring the winner in the Manchester derby on Monday.