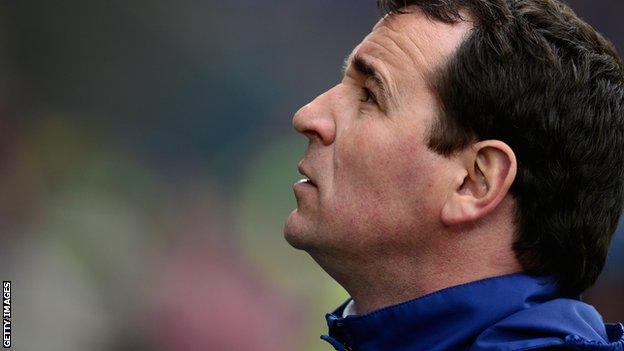 Gary Bowyer says he travelled to India and met Blackburn's owners Venky's earlier this week to clarify his position as caretaker manager.

Bowyer, one of five managers at Rovers this season, told BBC Radio Lancashire he got a "positive answer" as

"People who know how much I care for the club will understand that it was done for positive reasons," he said.

I needed to remove any negativity surrounding the managerial position, for myself and the players

"And I got a positive answer. It's me (in charge) for the next six games."

Blackburn, who were relegated from the Premier League at the end of last season, dropped into the bottom three in the Championship for the first time this term after

They go into a point from safety and with a game in hand on most of their rivals.

Bowyer, who has defended the timing of his trip to India and says it was necessary for him to do everything he could to lift the mood around Ewood Park.

"I felt that there was a lot of negativity around the football club, as there has been for the majority of the season," said the 41-year-old, who went four games unbeaten during his first spell in temporary charge in January but has yet to win since

"I realise the run of games we're going into are vitally important and I needed to remove any negativity surrounding the managerial position, for myself and the players. It was an opportunity to meet the owners and get that clarified.

"The majority of the work that gets done leading into games is done on a Thursday and Friday. I was there for both days and we trained magnificently on both days.

"I understand what people are saying, but if we kept going on with this negativity around the managerial position and it had an effect on the team's performances, I wouldn't have been able to live with myself.

"You can't do right for wrong at the moment, but there was a genuine reason for going."