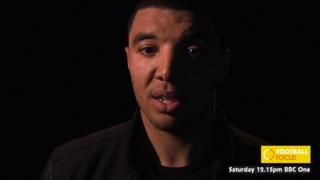 Watford's Deeney on his time in prison

Deeney was given a 10-month prison sentence following a conviction for affray but released after three months in September 2012, and his goals have helped propel the Hornets to the verge of the Championship's automatic promotion places.

You can watch the full interview on Football Focus, Saturday, 13 April, 12:15 BST on BBC One and on the BBC Sport website.