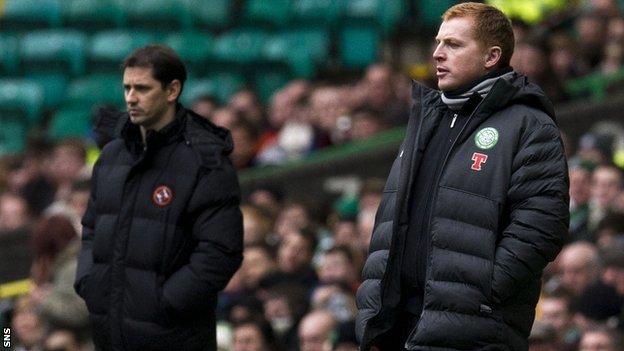 Manager Jackie McNamara hopes Dundee Utd atone for a previous "embarrassing" loss to Celtic by beating them in the Scottish Cup semi-final.

United lost 6-2 to Neil Lennon's men the last time they met in February.

"Obviously the scoreline at the end was a bit embarrassing," said McNamara. "But I think we went down there and showed we can create chances.

"The most important thing is that the players don't freeze, enjoy the occasion and play their normal game."

McNamara, who replaced Peter Houston as boss at Tannadice in January, was a team-mate of his counterpart Lennon during their playing days at Celtic

He dismissed the notion that the Tangerines are in the better psychological position as underdogs for Sunday's Hampden tie.

"I never go into a game and say there's no pressure," McNamara said.

"There's the pressure of a good support coming down; pressure to look after our own performance, not going there to make up the numbers.

"The biggest thing is the concentration and focus. If you switch off against Celtic, they'll punish you."

That said, the Glasgow side have lost five of their nine ties at the national stadium under Lennon's charge - including their last three.

But such records are not seen as significant by McNamara.

"I don't look too much in to things like that with stats and different things," he added.

"It can work both ways, that'll be in the back of their minds. They're obviously going to win the league comfortably, so this is an extra one that they'll be going for to try and get the double.

"We've been fortunate with the way things went for us to get in the top six [in the SPL]. It would be fantastic for everyone connected if we could get to a final."

Meanwhile, Lennon is mindful of the importance of improving on Celtic's recent Hampden record.

"We have done a lot of analysing this week and looked at previous encounters, where we can do better," he said.

"Hopefully, that will resonate with the players going into the game on Sunday. But I wouldn't make too big an issue of it.

"We keep getting there, that's the most important thing.

"The next step is to replicate the form we have shown going into these games at Hampden, which we haven't done on previous occasions."