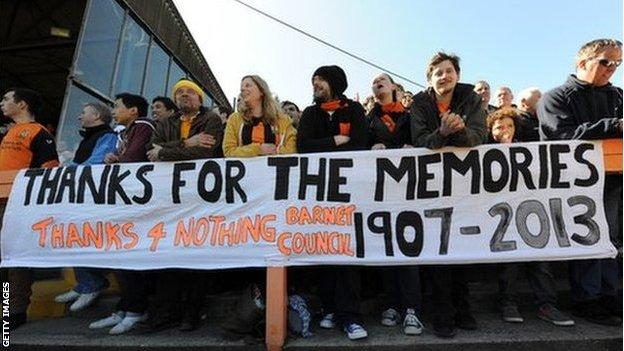 Graham Stack's last-minute penalty save helped Barnet clinch a vital victory against Wycombe in their battle to avoid relegation from League Two.

It was a fitting end to the Bees' final game at Underhill as the three points saw them move out of the drop zone.

Jake Hyde scored late on from close range to put Barnet ahead.

And Stack ensured the three points when he tipped Joel Grant's penalty wide after Tom Flanagan fouled Bruno Andrade in the box.

Barnet, who travel to Northampton Town on the final day, are now a point clear of AFC Wimbledon who dropped back into the relegation places.

"The atmosphere was really great and there was great pressure, but we had to turn it around into positive energy.

"We created enough chances to have buried the game earlier, we came in with a mission and we put our foot on the gas from the first minute.

"It's still hard to go to Northampton [in the final game] and get a win as they won't roll over and give us the three points and they are going for a play-off place. We will have to dig deep to get the result.

"When the game started it was one-way traffic for Barnet. Fair play to them, they were well up for this one and we didn't have an answer. I thought we were poor.

"We didn't really create much and it's crazy that we could have nicked a draw at the end with Joel Grant's penalty, but fair play to Graham Stack who's come up with a great save and fairytale moment for him.

"We've got some work to do because it was a big occasion and a lot of us didn't turn up.

"It's been a very long mentally and physically draining season for us and we could have gone 10h today, which is amazing considering where we were in November."