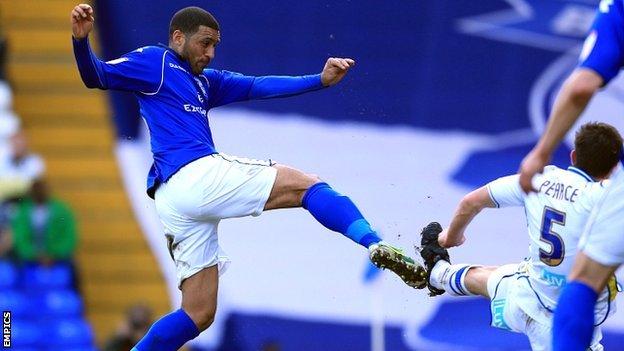 Ravel Morrison hit the crossbar in the first half with Ross McCormack's free-kick into the penalty area clipping the woodwork for the visitors.

Birmingham's win takes them up to 10th in the Championship table.

The goal for Hayden Mullins was his second of the season, coming after he scored in the 2-2 draw at Nottingham Forest on 15 September

Leeds, also mathematically safe in a congested division, drop into the bottom half having won both of their fixtures since the appointment of McDermott earlier this month.

The hosts were the stronger side in the first half as Morrison, on loan from West Ham, pulled the strings.

He almost broke the deadlock with a superb curling effort which came back off the crossbar, while Shane Ferguson fired narrowly wide from just outside the area.

Leeds were denied midway through the half when Jack Butland brilliantly tipped over Michael Tonge's 20-yard strike.

Mullins then failed to find the target from eight yards out before McCormack's free-kick preceded a better spell for the visitors.

Birmingham struggled to find the same rhythm as they did in the first half but, against the run of play, Mullins tucked in the rebound after Redmond's long-range shot was saved.

"I thought that the way Leeds were playing with a new manager I just wanted an older head to look after the likes of [Ross] McCormack and he [Hayden Mullins] did it well.

"I didn't include Hayden to be the match winner but it was a good occasion to celebrate his 550th game.

"It was a terrific win so far as I am concerned. I'm delighted with the three points and a clean sheet."

"I thought we should have got something out of the game. When it was 0-0 we were on top and then they scored from nothing.

"When I arrived at the club I put my reputation on the line and to make sure Leeds remained in this division. So far as I am concerned it is job done.

"Everyone must be going in the same direction. If that occurs in this club you have a major chance."