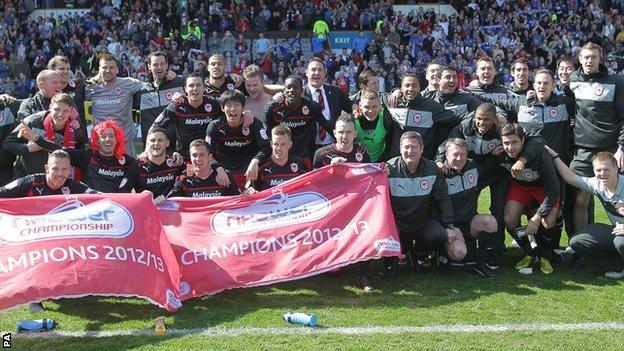 Cardiff City clinched their first Championship title after earning a draw against Burnley at Turf Moor.

Craig Conway's first-half strike gave Cardiff the lead but the hosts levelled through David Edgar in the 90th minute.

The Bluebirds had already clinched Premier League promotion, but this point ensured they won their first league title since they topped the old Division Four in 1992-93.

The draw moves struggling Burnley four points away from the relegation zone.

While Sean Dyche's battling side are still not assured of their status next season, their opponents ensured they will enter the Premier League as Championship winners.

The visitors dominated for long periods and manager Malky Mackay will be disappointed Cardiff did not record their 26th victory of the season in Lancashire.

Mackay left talisman Craig Bellamy on the bench but the visitors enjoyed the better of the opening exchanges and striker Rudy Gestede let fly with a long-range shot which flew narrowly over the Burnley crossbar.

And it was Bellamy's replacement Conway who broke the deadlock when he beat three Burnley defenders with a superb right-footed curler into the corner of keeper Lee Grant's net midway through the first half.

Burnley failed to have a single shot of note on the visitors' goal and Dyche would have been happy to get his side back in the dressing room only 1-0 behind at half-time.

The Clarets boss made changes at the break, with Junior Stanislas replaced by Edgar and Martin Paterson coming on for Ross Wallace in a bid to bolster his side's midfield which had been overrun in the first 45 minutes.

Mackay's decision to bring Bellamy off the bench was a compliment to the way the home side had reorganised as Burnley began to exert pressure of their own.

Paterson nearly levelled the scores but his misdirected header went well over the Cardiff bar in the 69th minute.

David Marshall pulled off a superb save for Cardiff in the dying moments when he pushed Danny Ings' shot past his left-hand post, but the Cardiff keeper could do nothing about Edgar's header which salvaged a late point for Burnley.

"It's more difficult than you think - you've got a crowd expecting, you've got an opposition who are the market leaders and I knew Malky [Mackay] would go hard and their team wouldn't just back off. They've got some real talent there.

"It was more a case of telling them to relax and play with energy. There were a couple of tactical changes and obviously one of them worked nicely.

"[Speaking about Cardiff] They've done a great job, it must be said - Malky, his troops, his staff, his player have done a fantastic job. We all know, we've seen it this year, it's as tight as ever, it's a tough league, make no mistake."

"It was obviously a tremendous feeling on Tuesday night but for us to go and win the title is something that we then spoke about within a day. We wanted to go and get the boys their medal and win the championship.

"I'm delighted that we've had the mental strength and character to have that consistency and just keep going, being relentless. That's what we were this year - relentless.

"I spoke to them about [how] most people get to watch history happen; very few people get to actually make history. For them to do that today for the city of Cardiff is something that I'm very proud of."