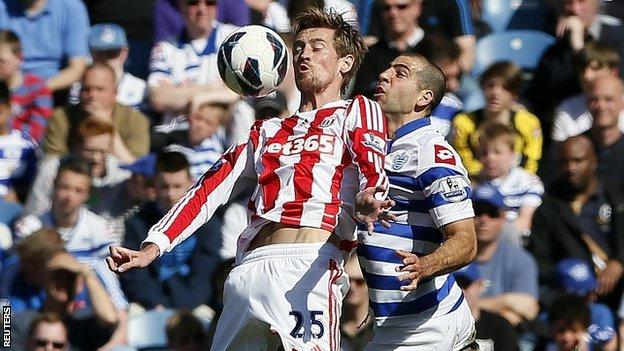 Stoke City took a big step towards survival with a rare away win that all but sealed Queens Park Rangers' fate.

And Jon Walters sealed the win from the penalty spot after Clint Hill had impeded Crouch.

Stoke moved up to 15th place, six points clear of the drop zone, while QPR will be relegated on Monday if Aston Villa beat Manchester United.

Livewire striker Loic Remy apart, QPR looked a disjointed unit in a match which provided ample evidence as to why they are in such a dire predicament.

Too often players shot when they should have passed and vice versa, while in conceding the opening goal shortly before the break the home side reprised a habit that has cost them points up and down the country.

Stoke had entered the match on a desperate run that had seen them slip into relegation contention, but Crouch's opener injected much-needed confidence into their play and they comfortably held on for a first away victory since 1 December.

With Stoke pressing from the off, a QPR side showing five changes from the one beaten 2-0 at Everton last weekend looked to threaten on the counter-attack with Adel Taarabt finding space between the visitors' midfield and defence.

The Moroccan almost shaved the post with two early long-range strikes then ignored well-placed team-mates to his left and right before blazing wastefully wide.

Stoke's attacks regularly carried promise but too often broke down due to a lack of guile and poise in and around the penalty area.

Nonetheless, they were almost gifted an opener when Rob Green fumbled Walters's shot and looked on in relief as the ball bounced away to safety.

Green fared rather better when called into action to keep out a fierce long-range half-volley from Crouch that was destined for the top corner.

Just as they had against Everton, QPR fell behind just before half-time. Marc Wilson dispossessed Andros Townsend and fed Jerome, who eluded Chris Samba with some neat footwork and pulled the ball back for Crouch to put away only his second goal since September.

Samba almost levelled before the break as his hooked effort from a right-wing free-kick drifted fractionally wide of the far post.

With four goals in his previous six starts, Remy represented QPR's best hope and the Frenchman almost delivered an equaliser when he wriggled past a couple of Stoke defenders inside the box and fired a left-footed shot that was well saved by Asmir Begovic, diving to his left.

From the resulting corner, Samba's goal-bound effort was unwittingly kept out by team-mate Stephane Mbia.

With gaps opening up in the QPR backline, Stoke came close to making it 2-0. Steven N'Zonzi's cross from the left found its way to Charlie Adam at the far post, but the Scot's cushioned effort looped over the bar.

It was no surprise when the second goal arrived 15 minutes before full-time. After Robert Huth's header had struck a post, Crouch was pulled down by Hill as he looked to convert the rebound and referee Chris Foy pointed to the spot.

Walters, who had missed two of his previous four penalties this season, was forced to take his effort twice because of encroaching players but held his nerve to drill the ball into the bottom corner.

QPR fashioned little by way of response and must surely now start planning for life in the Championship next season.

"They are very good on the break and we got caught four or five times. It was great for Peter to score before half-time and in the second half we tightened up and were a lot better.

"It takes a bit of pressure off but there is still pressure there and the four games we'll play are very tough games.

"40 points will be enough because we have good goal difference. There is still work to be done. A win or three draws, I don't care how we cook it."