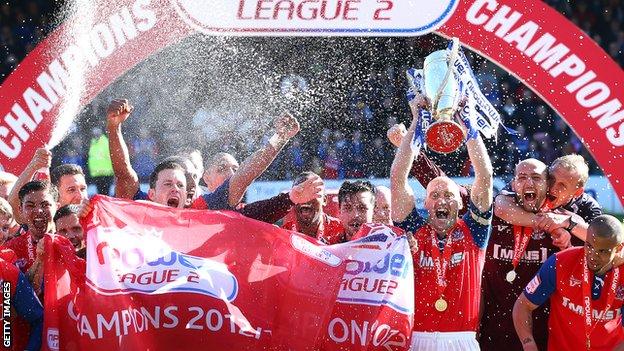 Gillingham sealed the League Two title, their first in nearly 50 years, despite being held to a draw by AFC Wimbledon.

They then doubled their lead when Danny Kedwell deftly headed in a left-wing cross from Chris Whelpdale.

The Dons struck back when Jack Midson scored from close range and Jon Meade levelled late on, but it was not enough to stop Gillingham taking the trophy.

"Amazing, 10 months of hard work. They've just kept going, getting points, breaking records, the first title Gillingham have won for 50 years and to be the manager on this special day is a magnificent feeling.

"This is the best highlight of my career. I'm the worst Allen in the Allen family. The others are multi-talented, and for me, to be nicknamed Mad Dog just because I tackled people and make a living from football, and to be known as a manager who keeps clubs up, to be champions is unbelievable.

"It would have been great to get three points but playing the Champions away from home is never going to be easy.

"If we can play like that next week then we will be OK and I still believe, I don't think York or Dagenham can overtake us if we win.

"We have got to focus on ourselves and if we win we stay up, we have to keep going and do what we are good at."