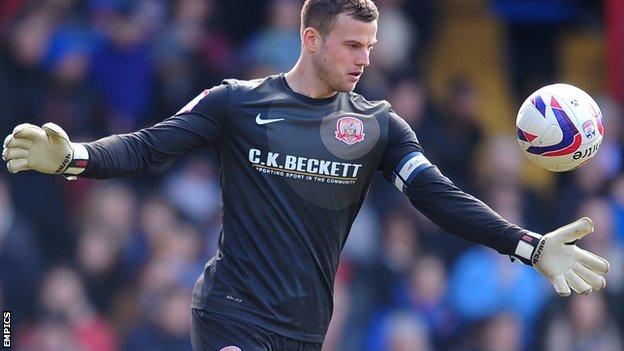 Nottingham Forest are two points adrift of the Championship play-offs after Barnsley earned a valuable point in their battle against relegation.

But they held on for a point which leaves only goal difference separating them from safety with two games left.

Forest entered the match without a win in their last five games and they started positively as they looked to increase the pressure on the top six.

The Tykes failed to cope with Forest's dominance and they were grateful to Steele for almost single-handedly preventing the home side taking the lead.

He palmed away Sharp's header and then pushed away Adlene Guedioura's fierce long-distance strike.

Somehow David Flitcroft's side managed to reach half-time without conceding, but their hopes of changing the pattern of play after the break were quickly dashed.

Steele was called into action again as he tipped Reid's effort onto the post, before Forest hit the woodwork for a third time through Sharp's stinging volley.

"I couldn't ask more from the players. You have all seen the post hit, the bar hit, all the chances we created, all the crosses and there's no doubt we deserved three points. Lady luck was against us.

"At the moment the breaks are just not going for us, but I said to the players after the game that if they take today's form into the last two games they will win them both."

"The point might go a long way to securing our safety.

"They don't know when they are beaten, this team. Although a lot of people have predicted that we would go down we will continue to battle for the next two games.

"Despite what anyone might say we have earned that point."