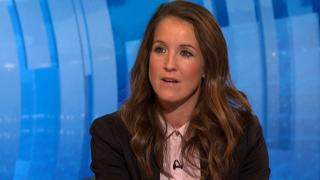 Women's game is at its best - Stoney

England captain Casey Stoney says the quality of women's football is the best it has ever been in this country.

The Lincoln Ladies defender also says she has noticed a change in attitudes towards the women's game since the Olympics.

Watch Football Focus every Saturday, 12:15 BST on BBC One, online, on mobile and tablet via the BBC Sport app.