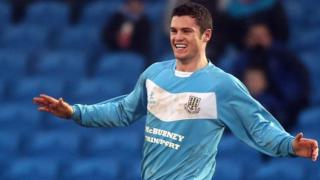 Ballymena clinched a thumping win over Donegal Celtic, who remain in line for a potential promotion-relegation play-off at the end of the season.

Sean Cleary scored on two minutes after his initial penalty had been saved by United goalkeeper Dwayne Nelson.

Mark Burns turned a Gary Thompson cross into his own net after 10 minutes and Gary Liggett lobbed John Connolly with an opportunistic 30-yard effort on 19.

Shane Dolan grabbed the third and then Alan Teggart kept his cool to fire in.