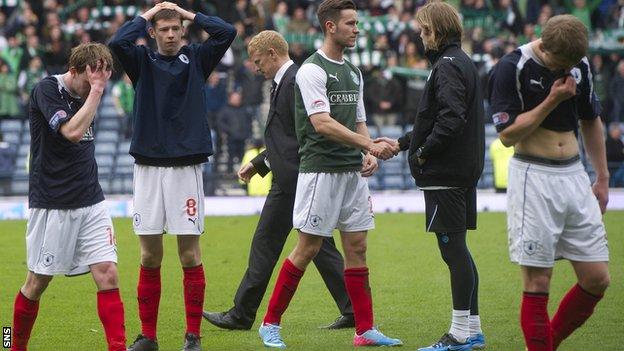 Manager Gary Holt has stood by his young Falkirk side despite a painful Scottish Cup semi-final defeat by Hibs.

The Bairns led 3-0 at the break only for Hibs to dramatically turn it round and clinch a 4-3 extra-time win through Leigh Griffiths' 115th minute strike.

"I'm proud of my boys," Holt told BBC Scotland. "We dug so deep into the well and just couldn't get there.

"I couldn't have asked for any more. The boys gave everything and then some. It just turned out it wasn't to be."

Falkirk have never beaten the Leith side in the Scottish Cup, but it looked like that record would be broken when Craig Sibbald, Jay Fulton and Blair Alston all scored to put Holt's men in a half-time position they could not have dreamed of.

Hibs created next to nothing in the first half, but the break gave them time to reorganise.

And it paid dividends immediately, as 18-year-old Alex Harris scored from 25 yards to give Pat Fenlon's men a life-line.

Griffiths then squandered a penalty but scored Hibs' second soon after. Substitute Eoin Doyle fired an equaliser with 10 minutes left to bring extra-time, in which Griffiths got the winner in spectacular fashion.

Holt, in his first game as Bairns boss, added: "Maybe them scoring so soon after half-time put us on the back foot a bit.

"I know that 90 minutes is a long time in football. I said to the boys that they'd come out hammer and tongs at us in the second half and we were unlucky.

"They were all out on their feet. That's what I said to them, to come off the pitch at the end of the game on your hands and knees.

"Today, we just couldn't get over the line."

Holt reckons this harsh experience is all part of the football learning process for those youngsters.

"We're not used to these occasions, but we're here and we want more of it," he said.

"The lads might not agree with me just now, but this will be a good education for them."