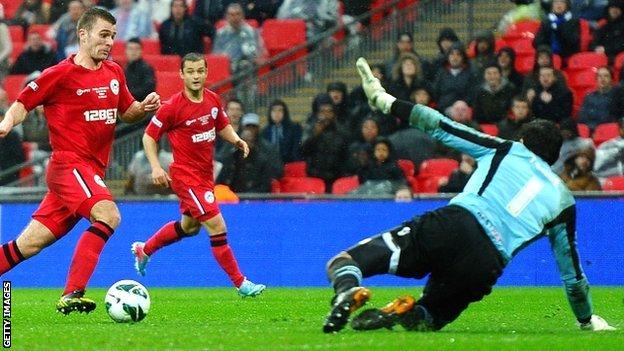 The 21-year-old faced a barrage of criticism after his wild tackle on Newcastle's Massadio Haidara in a Premier League game last month.

Wigan's route to the final

But McManaman scored and played a telling role against side Millwall as Wigan reached their first FA Cup final.

"The whole situation has been very unfair on him... but today we saw the real Callum McManaman," said Martinez.

"It's great to see that it's now all about his talent. He's an attacker, not a defender, and we can see that in how he takes the goal. He seems like he's been playing at Wembley many, many times."

McManaman scored with 12 minutes remaining to seal a return trip to Wembley for Wigan, who went in front through Shaun Maloney's first-half volley on a day marred by fighting amongst the Millwall fans.

It was a historic victory for Wigan, who lost the 2006 League Cup final to Manchester United at the Millennium Stadium in Cardiff, but have never played in an FA Cup final.

And it potentially brings a sense of closure to Wigan chairman Dave Whelan, who Martinez said would lead the team out at Wembley for the final after not doing so in the semi-final despite speculation that he would.

Whelan, 76, last appeared on the Wembley pitch in the 1960 FA Cup final, when he broke his leg while playing for Blackburn Rovers in a 3-0 defeat by Wolverhampton Wanderers.

The injury ended his playing career at the age of 23.

"Yes, we will get the chairman leading the team out," Martinez said. "It will bring full circle [to] his time with the FA Cup."

Spanish boss Martinez said reaching the final for the first time was "a big, big achievement for the players and they deserved it. So do the fans. A lot of people judge us on the numbers [of our fans] but it's about the quality of the numbers".

He added: "Huge credit to Millwall who competed until the last second - there were plenty of difficult situations as they can be quite powerful.

"To handle being the favourites in a semi-final can be tough but I thought we did that magnificently. From the young players to the experienced players there was a real togetherness."