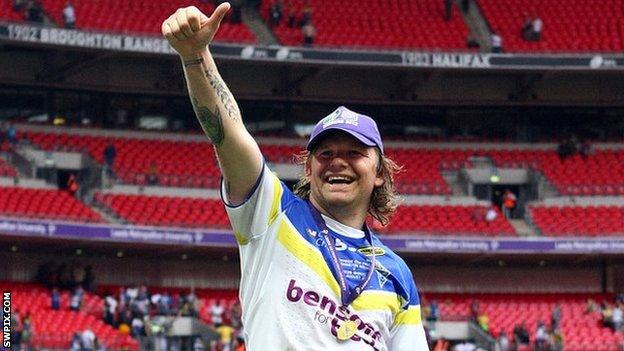 Long-serving stand-off Lee Briers has been handed a coaching position with the under-19s academy at Warrington.

The 34-year-old's new role will run alongside his playing career.

Former Wales international Briers, who joined the Wire in 1997, has made more than 400 appearances for the club and is their record points scorer.

He has helped Warrington to three Challenge Cup wins in the past four seasons and also played in last year's Grand Final defeat by Leeds Rhinos.

A neck problem has sidelined Briers since the second weekend of the campaign.

"I just went down to help take my mind off being injured and take the focus off that. I loved it," Briers, who has a playing contract until the end of 2013, told the club website.

"I don't know if it's fortunate or unfortunate that but the club then asked me to take it up on a more permanent basis.

"I'm really enjoying it. It is good to see the young kids learning and then putting that onto the field.

"It's what I want to do [in the future]. The club has been fabulous with me. They've given me that stepping stone now to hopefully take the role on more seriously when I do retire."

Head coach Tony Smith added: "Lee's been doing some work with juniors at the club for a little while but it's good to see him progress to something more official.

"He already has some experience with Wales but it's great to now see him pass on some of his knowledge to those within the club he's been with for so long.

"He's really keen to pursue a coaching career and it's great that we can help with this but his priority is still playing for the Wolves."